The Quest for the Golden Party Hat in Runescape

The Quest for the Golden Party Hat in Runescape 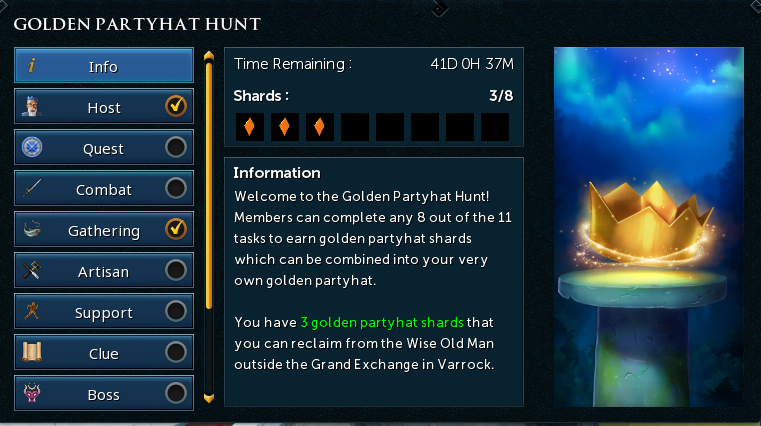 So i logged in the other day and they had the new splash screen and all of that stuff and then i saw the Golden Party Hat hunt...

Pff whatever another useless item to add to my bank or DJangos (not sure what his name is) anyway. But then i got a shard just for having membership and i was hooked. I have to get all the shards for this party hat!!! Why? Im not sure but i have to do it. Before Janruary, and then it will be gone forever, unless they release it under that token thingo, in which case it will be worthless.

Ah well i have to try dont I?

Ok fine how do we get this golden Hat? Do what runescape does best, a massive skill grind and then wait for the RNG and get a shard to add to my already full bank.

Update: completed in 9 days, but i was not playing that much... 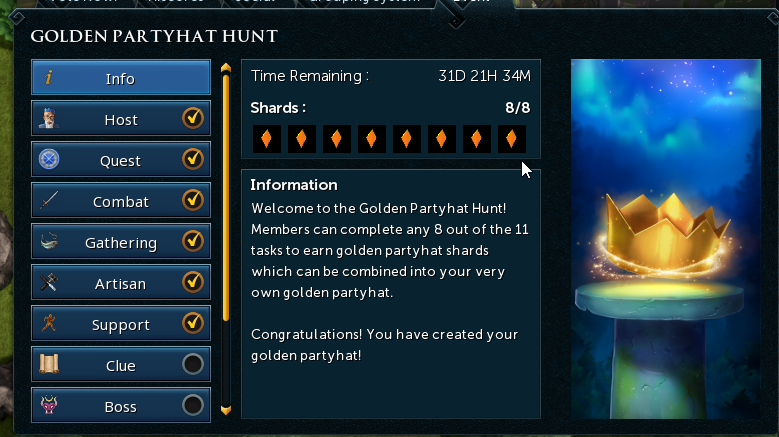 How many shards do i need for this PHAT?

Should i call it a PHAT or a golden PHAT, anyway... i need 8 shards. (not sharts..) why does autocorrect always do that, and always to those kind of words.

I will list these in no particular order just the order i decided or already managed to get them in.

Yep thats the easy one that sucked me into this whole quest thing, you get this from logging in with premier club.

The Wize old man version 2 at the GE.

This is a nice easy shard as well, head over to the grand exchange and talk to the Wise old Man, and he will give you a shard. I initially went over to Draynor and asked him about his hat, but apparently the old man over there has no idea that he is also located at the GE, ah well. Gaming.

I was kinda already doing this one anyway as i was collecting energy from the incandecent whisps for making additional porters for archeology. Well this one took me about 4-5 hours i think of collecting before i got the shard. 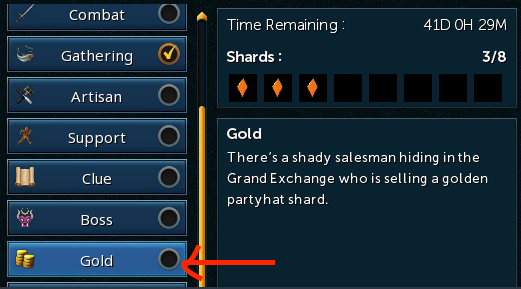 Do you have a spare 30 million gp? Well this one is easy then, just go to some shady dude near the GE and pay him 30 Million for the shard. I will leave this one until the end if i still have not gotten all the 8 shards required. No hurry right?

This one im going to do with silverhawk boots, since they have been giving away a ton of feathers for the boots lately so i have about 3k sitting in the bank. Apparently the boots proc can give you a shard, so will see how that goes.

not sure if this one came from safe cracking or the boots, but its done now i can move onto a combat based shard. Also Yak track shards have come now so might be able to get the one from there, i guess the phat prices will tank now. 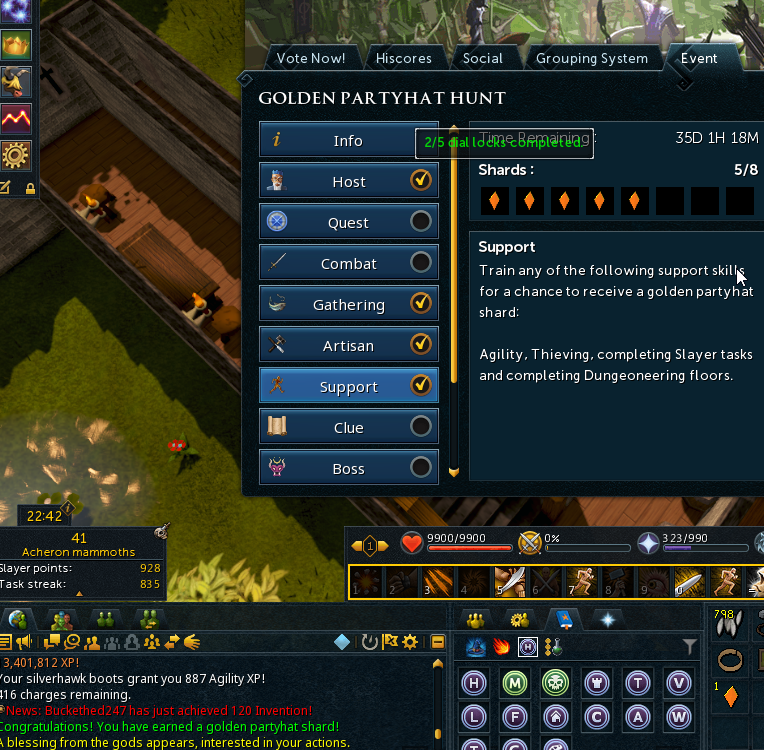 This one im going to sit on the harps in prif, and wait for the shard while also wearing the silverhawk boots, so grinding and waiting for both shards while waiting on the afk harps and gathering crystal dust which is nice.

How many more shards to get? 3 if i dont want to pay the 30m. But if i cant be bothered doing the quest then i have to pay the 30m or wait for the yak track probably. Hmm...

Ok so sitting on harps in prif and i got about 2600 dust from the harps before i got the shard. 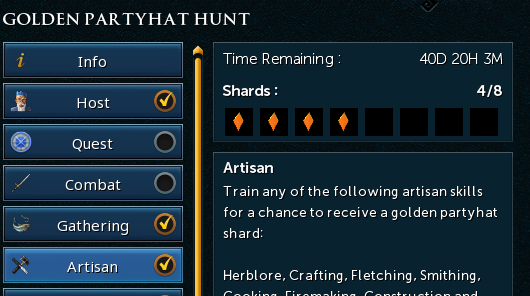 I think ill just use my old method of afking in the smoke dungeon,  Its very low effort and pretty much afk, just sit in the lower part of the dungeon in the middle and then when you go out of combat head up the stairs and back down again easy.

I will need to pick an easy boss for this one, maybe i should combine this with Shard 7 for the combat, i wonder what bosses are afk that i could use for this? More research required.

I really cant be bothered questing, and this one is marked as being long? So i checked the quest Once Upon a Time in Gielinor and it seems to be ok, so maybe ill do this one.

I actually ended up doing this, it took me a few hours (well it felt like it anyway) as i had not done the other pre quests.

Yeah i dont really like doing clues, so i think ill skip this.

Cant do this one yet as yak is not out yet.

Ended up getting this as its nice and grindy.

Currently worth 660m, should i sell it or keep it??... well i dont really need the cash right at this minute, maybe i will keep it for now and monitor the price. 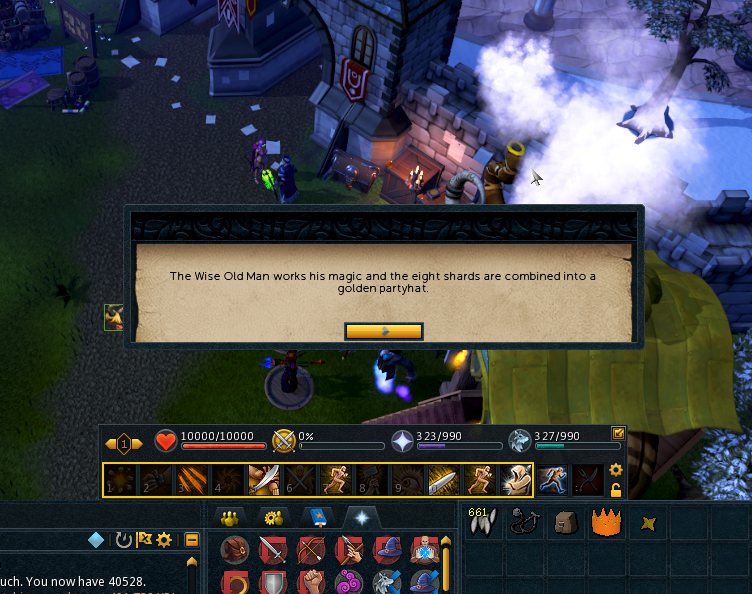 When i was a little kid, I was really scared of the dark. But then I came to understand, dark just means the absence of photons in the visible wavelength -- 400 to 700 nanometers. Then i thought, well, its really silly to be afraid of a lack of photons. Then i wasn't afraid of the dark anymore after that.
Elon Musk